Once again I was hosted by Coastal Maine to teach a workshop in this beautiful state. In 2016 I was teaching in Belfast and this time it was held in Rockland. A beautiful seaside town, famous for its lobster industry, among other things. The best (and reasonably priced) lobster roll is available at “Claws” on Hwy1.

I also went back to see Andrew Wyeth’s work at the Farnsworth museum in town. Always a treat to see his paintings.

I had a full class with 16 students and the week was a blur of painting, sightseeing, eating and more painting!
Thanks to everyone who who came out! I’ll be back in 2020

A timely post after discovering this article online. People should know what’s going on and
spread the word about it! I hope you all re-post this!

When I first signed up for Facebook in 2009 (and reluctantly too) I quickly realized that it
could be a great tool as an artist to get my name and work out there. Several of my peers where already on before me and it did good things for them. That was when all of your posts were actually seen by all of your ‘friends’ and their ‘friends’ as well. With time, you could build an ever-growing audience.

That changed a while ago, around the time when the ‘fan pages’ became ‘business pages’
and the advent of paid ads. Facebook made insidious changes to the way posts are seen
on the feed. They switched to an algorithm-based feed, where certain posts are prioritized. In a nutshell: if you pay them money, you’ll have better reach.

It is the same on Instagram now which is, unfortunately, owned by the same people!
You can very well see what this creates: it becomes a numbers game. A world of fake ‘likes’
and ‘followers’ where quality will be sacrificed for quantity. People and companies will do anything to bring their numbers up. It is no longer about the art! People are looking at your social media numbers before they even look at your art!

Another interesting site is here: This page lets you check Facebook pages to find out, by country, where the ‘likes’ / ‘followers’ are based. If a page has a high percentage of likes from India, those are usually bought and most likely not ‘real’ followers.

Interesting times! I am not saying it’s all bad. As artists we absolutely have to be on there and maintain a certain presence. But it is now a far cry from what an app like Instagram was initially created for: A place for art and artists to support each other.

One thing is for sure: they’re not getting any of my money! I’d rather connect to people in the real art world. When it comes to advertising, I think there are better avenues to spend your money than on social media. 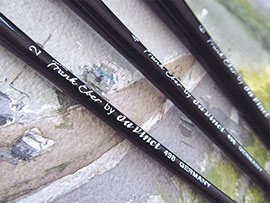 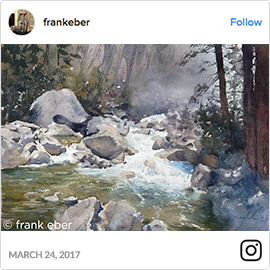 © Frank Eber. All rights reserved. Do not copy or reproduce site contents without my express written permission. Thank you.